With six all-new models, PRS Guitars 2018 SE Acoustic line up gives players a wider selection of feature sets than any other acoustic line up in the company’s history. No matter what you’re looking for in an acoustic instrument, this model lineup has you covered.

“These are tools to do a job. There are different situations that you would use them in, so we’ve tried to make these instruments everything they can be for writing, rehearsing, performing, recording, or just trying to unwind at the end of a hard day. They are tools to do a job, and I think they do it all very well,” Paul Reed Smith.

“At a recent demonstration with three local musicians, each person had a different personal favorite model, which we loved seeing,” Jack Higginbotham, COO. “We have taken great care in designing this series to deliver PRS benchmark quality, playability, and tone. The details found in these six guitars give players some great options.”

Acoustic wood choices help determine a guitar’s fundamental tone. The 2018 line up of PRS SE acoustics feature mahogany, ovangkol, and maple back and side woods – all paired with solid Sitka spruce tops – each one offering its own flavor. That flavor is further developed by the guitar’s body shape and bracing style.

PRS offers two acoustic body shapes: Angelus Cutaway and Tonare Grand, meaning “Angel” and “Thunder” respectively. These shapes provide comfort and a familiar feel for players and are both well suited for playing fingerstyle or with a pick.

The bracing pattern of an acoustic also significantly contributes to its voice. 2018 PRS SE Acoustics come with either traditional “X” bracing or PRS’s hybrid “X”/Classical bracing. Traditional “X” bracing allows the top to vibrate while providing a stability that gives these instruments their signature punch. PRS Hybrid bracing features the traditional “X” at the soundhole with classical fan bracing across the belly. This allows the top to vibrate more freely for a rounder, more projecting tone. The back bracing on both body shapes is designed to “lock down” the back and sides to promote the instrument’s projection through the top, giving the instruments a unique tonal quality.

The SE AX20E and SE TX20E (Angelus and Tonare body shapes, respectively) feature mahogany backs and sides with solid spruce tops for warm, balanced tone. Braced with tradition “X” bracing, these models have a punch that stands alone beautifully or cuts through the mix.

The SE A40E and SE T40E pair ovangkol back and sides with a solid spruce top for full, lush tone. Braced with PRS hybrid“X”/Classical bracing, these models have a voice projects with breathtaking volume and delicate nuance.

The SE A50E and T50E marry maple back and sides with a solid spruce top for stunning warmth and depth. Braced with PRS hybrid“X”/Classical bracing, these models have an uncommon 3-dimensional character for guitars with maple backs and sides.

All 2018 PRS SE acoustics feature a Fishman GT1 electronics system, featuring an undersaddle pickup and soundhole mounted preamp with easy-to-access volume and tone controls. The Fishman GT1 pick up system delivers dynamic, organic tone and allows players to take this guitar from rehearsal to the stage with ease.

PRS SE Acoustics are built from an array of beautiful, solid tonewoods and tonewood veneers, each with its own unique voice. Sharing the DNA of our Private Stock acoustics, PRS SE Series acoustic guitars come in either our Angelus Cutaway or Tonare Grand body shape and feature PRS hybrid X/Classical bracing, so you can choose just the right details to complete your sound and style 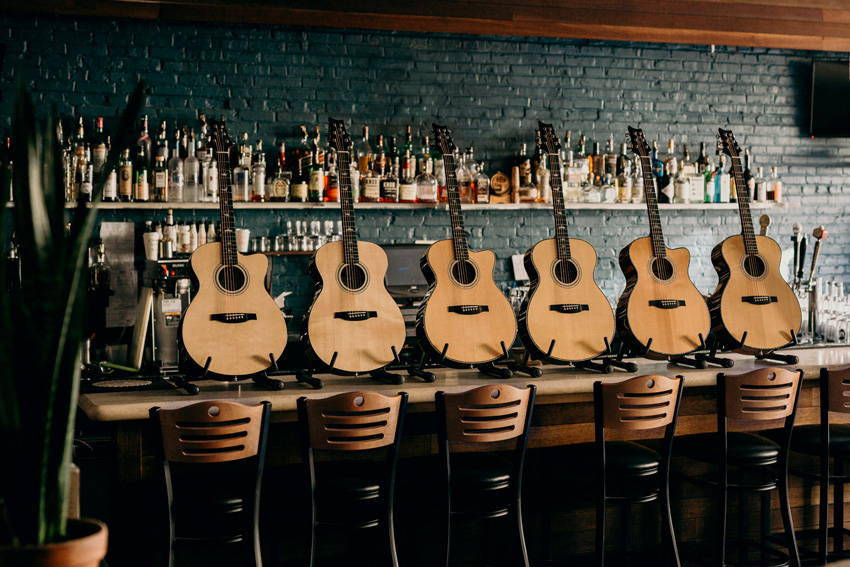 PRS SE ACOUSTICS: SHAPING THE SOUND OF A NEW LINEUP

In January 2018, we decided to kick off the year with a bang by announcing an entirely new lineup of PRS SE Acoustics. It’s safe to say that a lot of time was dedicated to researching and play-testing these new instruments, but in this blog we want to take you deeper into how we shaped the sound of this new and exciting lineup.

In the earliest planning stages, our desire was for six uniquely voiced models, able to cater to multiple musical stylings, yet at the same time share the common thread of PRS quality and reliability. Finding the right acoustic for your needs can be daunting, but we built each of these new guitars to excel in songwriting, performing, and tracking in the studio.

The Angelus body shape was born from the talented makers of our Private Stock Acoustics. A tried and true PRS body shape, the Angelus has appeared on earlier SE Acoustic creations and cemented itself as a staple. The cutaway offers easy access to the higher frets while maintaining a surprising fullness of tone despite less body mass.

(AX20E): “This SE Angelus has a crisp high end, but isn’t entirely too bright. This guitar complements the chime of first position chords with string-to-string definition and no negative overtones.” - American Songwriter

(TX20E): “The guitar felt well balanced across the strings and up the neck, and the acoustic sound was also even with a distinct bias toward the upper midrange. Strummed chords sounded clear and warm, with pleasing overtones and crystalline resonances floating over a tight, modest low end. Fingerpicked passages revealed the instrument’s sweetness and dynamic sensitivity. Single notes came through true and clear, with a bit of notable zing. There was no low-mid mud to be found; in an ensemble, the TX20E’s mids and highs would cut through easily.” – Acoustic Guitar

(TX20E): “Under aggressive strumming, the tone is slightly compressed and balanced across the frequency spectrum. There are no spikes in the midrange or awkwardly booming lows. More delicate playing styles reveal a sweet high end that flatters fingerstyle and flatpicking without sacrificing cut and punch.” – Guitar Interactive

(A40E): “There’s a very nice balance between the registers in standard tuning. And when strumming cowboy chords or closed jazz voicings, the guitar has an appealing punchiness that probably translates well in band contexts. Individual notes in flat-picked lines are round and full, but are also very well defined—qualities that translate well to fingerpicking. In alternate tunings like open G and DADGAD, I often longed for a little more power and response from the bottom end. On the other hand, as I got to know the guitar a little better, I detected a real sweetness in its midrange-oriented voice that might be obscured by too much extra low-end thump.” - Premier Guitar

(T40E): “It produces a different frequency than the high end of maple back and sides, one that may further complement the sibilance of a vocalist – making the T40E perhaps the optimal choice for a singer-songwriter.” - American Songwriter

(T40E): “The T40E offers a lush, plump bass response – not dissimilar to black walnut, but with a little more in the midrange. The levels of volume and sustain are excellent and, with PRS’s ever-superb factory setup, the T40E is a very enjoyable guitar to play. We noticed, too, that the T40E responds particularly well to alternate tunings. Taking the sixth (bottom E) string down a tone to D really opens up a treasure chest of deep overtones and tonal nuances. Plugging the T40E into an acoustic amp with the controls set flat, the T40E performs admirably. The Tone control offers a considerable amount of ‘colour’ and, although not the most versatile pickup system on the market, the Sonitone is more than capable for most duties.”  - The Guitar Magazine

(A50E): “Fingerstyle players may enjoy the A50E’s accentuated midrange, and almost anybody will enjoy the huge sound this guitar packs.” - American Songwriter

(A50E): “Sonically, the maple bodied A50E is bright and forward reaching, with a tight bottom end, an even midrange, and glittery highs. Like the TX20E, it lacks low-mid oomph, opting instead for a balanced sound with prominent highs that cut through. Strummed chords sparkled while fingerpicked passages produced luminous sonorities. Plugged in, the Fishman GT1 captured and conveyed the instrument’s naturally bright character and dynamic responsiveness.”  - Acoustic Guitar

(A50E): “The A50E is a fastball down the middle in the tonal department. It’s not fancy but rather straightforward, with a strong fundamental sonic sensibility. You can wail away at barre chords without worrying that the tone might compress or quack. It’s well-designed, with PRS hybrid X-/classical bracing that allows for a nice combination of nuance and bombast, the blend of which simply depends on your attack. The overall sound is balanced and powerful but not boomy, and while maple back and sides contribute to a sound that’s on the present side, it’s not particularly trebly.” - Guitar Player

"With the new SE Acoustic lineup, we wanted to pay homage to our classic acoustic body shapes from the Private Stock line, but create six unique sounding, fun-to-play instruments that you just don't want to put down." - JACK HIGGINBOTHAM